8. Wool and Fur Mites of the Angora Rabbit

If you have Angoras, chances are that you will have a wool mite problem sooner or later, caused by the endemic skin parasite, Cheyletiella parasitovorax1. If the rabbit’s skin becomes red, irritated and flaky, or if the rabbit simply appears to have a bad case of dandruff, wool mites may be the cause. With professional veterinary advice, we administer Ivomec.

We get the 1% strength Ivomec, or other brand of ivermectin, for swine or cattle; make certain to NOT get the “Ivomec Plus,” get the plain ivermectin. We will draw it into a syringe and then remove the needle and just dribble the injectible fluid onto the rabbit’s tongue, and the rabbit will lap it up. This is easier than giving injections under the skin, which sting. There is anecdotal evidence that this may also be effective against rabbit pinworms.

We will measure the 1% out at the rate of 1 hundredth of one ml per pound of body weight. This will work out to 1/10 ml for a 5 pound rabbit. These dosages are very tiny. You have to have an insulin, one-cc syringe to correctly measure these minute amounts. Often, one dose is all that is needed. However, we may dose the rabbit again after two weeks, and if the mites were severe, again after another two weeks. You should know that ivermectin has not been officially approved for use in rabbits, so consult your veterinarian about its use.

Cat Flea Powder is an effective treatment for wool mites if the active ingredient is 5% carbaryl. Just sprinkle it onto the affected areas (usually just behind the rabbit’s ears) and smooth it out. It is great for spot treatments. DO NOT use any other kind of flea powder, that may be toxic to rabbits and that might not be effective against fur mites.

For rabbits, ivermectin use is “off label,” because no formal laboratory studies have ever been done to officially clear it for the species. However, ivermectin is used in many other species, and sometimes humans too. (It may be toxic to some collie or shepherd type dogs that have a genetic condition that makes them more sensitive to it.)

Here are a couple of graphics to demonstrate just how very tiny the correct dosages are. The image below is of a 1cc syringe, also known as a “tuberculin syringe.” The second image shows the dosage range for a 5 pound rabbit. At most, that would be only 1/10th of 1 cc! Fortunately, ivermectin seems to be a medication that is usually tolerated well even when dosages may accidentally slightly exceed the maximum. Some Angora breeders give ivermectin monthly in half-doses as a prophylactic against fur mites. 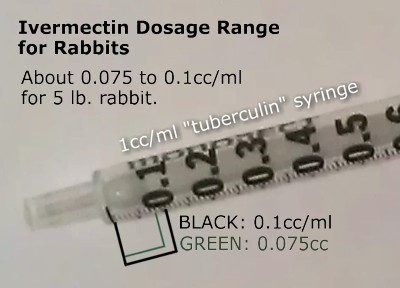 Ivermectin 1% injectable solution (for cattle).
Dose: 0.2 mg/lb
Route: orally, subQ, topically
Giving it orally is fine and works well as the other routes.
You can use it once a week if heavily infested.
Once every 2 weeks or once a month in minor cases.