The power of selection, and the resulting progress

Posted on April 24, 2015 | By Lil Peck | No comments
I continue to be very pleased with my juniors and other rabbits that I raised over the winter. (Please don’t take this as bragging; luck played a large part, and I might not always be so lucky.) Having returned to the rabbit hobby in late 2012, I am pleasantly surprised at how rapidly my herd has improved, and that is a demonstration of the power of the selection process. I selected what I thought were the best to be the parents of the next generation, and have moved forward. I now have juniors that please me very much with their cobby bodies and wool density.

At a show in Hutchinson KS last weekend, my juniors were winning over my seniors, which I take as a very good sign of the progression towards improvement with the younger generation. 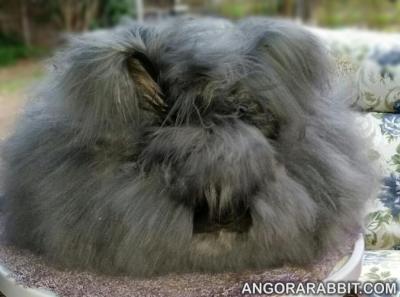 Showing Angora Rabbits is always more fun when done in the company of pleasant people, and we have been blessed to have a new fancier join us this spring, Laurie Holden. Laurie has come up to speed in the rabbit hobby very rapidly, due to her learner’s mind. She got started with a REW buck bred by Susan Wistand out of parents from Debbie McCormick’s Heartfelt Hares rabbitry, and then acquired a blue doe from Penny Osborne. Before the Hutchinson shows, she acquired the tort senior buck with which I earlier won several BOB/BOS. Tabitha Savage came to the show all the way from Ohio, (she came with a friend who was there for the Palomino national) and her company made the day even more enjoyable.

That tort buck, Drury, comes from a now somewhat “famous” litter. His litter sisters Mariah in Alabama, Marcella in Florida, Holly in Illinois, and Muri in my Kansas rabbitry, are all Best of Breed winners.

Earlier this month, New York Times Magazine published photos and an article about the Angora Rabbits at a show in Palmyra, New York. The writer got a few details wrong, but it is overall a nice summary of the hobby. Read the story The Cuddly, Fluffy, Surreal World of Angora Show Bunnies.

The National Angora Rabbit Breeders Club annual national specialty show is coming up soon, May 2, in Columbus OH. I am not attending, but many others are, and it sounds like it will be a very large show. Best wishes to all who attend!