Vic Vogts judged show A, and selected Kelly’s senior white doe as BISS. For BOS, he selected one of Lil’s black junior bucks.

Show B was judged by Blaine Maier, who chose one of Lil’s senior white does to be BISS.

On Saturday, the Angoras in show A of the Sunflower Rabbit Breeders Association were judged by John Grimm, who picked Lil’s other white senior doe for BOB. For BOS, he selected another one of Lil’s black junior bucks.

We tried to get a photo of Kelly’s doe, but she was too lively and playful to pose for a good picture. This photo is of Lil & Georgia’s doe, “Moirai Peugeot.” 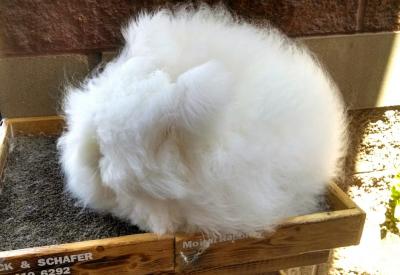