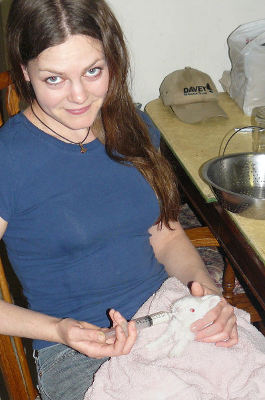 So recently it seems there are lots of baby buns needing hand rearing on this board, as some of you know I lost my sweet Angora doe a little under two weeks after she kindled, leaving me with six babies to take care of. I am sure there are many ways to do it well but this is what has worked for me, my babies are now over three weeks old, growing great and I didn’t lose any.

First couple feeding I used kitten milk re-placer, they really didn’t like and it was a battle to get enough in them, so I switched over to Goat’s milk. I would have preferred raw milk but couldn’t find any so ended up using some organic stuff from the natural food store, they love it! I use a small syringe (one that can fit comfortable in your hand), first one was 3ml but have moved onto a 12 ml one so I don’t have to fill it as often. My husband put a small piece of aquaruim tubing over the end of the syringe to act as a nipple. I generally put the milk in a small glass jar and place it in a glass mixing bowl filled with warm water, I think it is important to keep the milk warm while feeding and when you are doing more then one it cools down fast. I feed twice a day, as much as they want at each feeding, they will let you know how much they need, most will sit on my lap and hang out while I feed them. 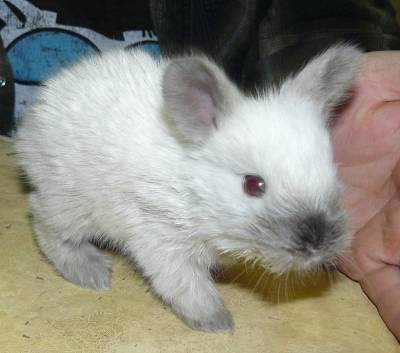 For the first week I got 6-9 ml a feeding into them now it is more like 12-24 ml. I let them sit on my lap and when they are nursing they like to stretch their legs out. You have to go slow with a syringe so it doesn’t go in their nose (or lungs!) I drip a couple drops onto the lips and let them lick it off then they will usually latch on to the nipple, you can slowly depress the syringe, if it is dripping a lot down their chest or hard to push out then slow down since they aren’t suckling.When they latch on it is very quick to feed them, at first it took me over an hour to feed six, not it is down to about 20 minutes.

They are in a large rabbit cage, I have them on lots of hay and part of the nest is still in the corner but as they have gotten older they spend less time in it, I took the nest box out right after Rosie died so the kits could get out in the cage better on hopefully onto solid food.Since I have a litterand they are inside I didn’t worry about them staying warm, If I had one by itself it would be a good idea to but a warm water bottle or something in with it and make a nest. I have a dish of water and rabbit pellets (although no one seems excited about them yet) Alfalfa cubes and I give them fresh grass several time a day.