Angoras in the news today!

Posted on September 10, 2015 | By Lil Peck | No comments
This is a big day for Angora Rabbits in the news! My friend Penny Osborne appeared on KCTV5 this morning with two of her English Angoras.
Betty Chu, publicity chair of the NARBC, continues with her creative ways to promote Angora Rabbits. Betty’s doe, Chu’s Franchesca, is in the Guinness Book of World Records! Read about it at Betty’s Northern California Angora Guild blog.


My term as District 4 Director of the National Angora Rabbit Breeders Club began in August. District 4 includes: California, Nevada, New Mexico, Arizona, Utah, Colorado, Texas, Louisiana, Arkansas, Kansas, Missouri, Oklahoma, Hawaii, and the countries of Mexico, Central America, and the region of Pacific/Asia. District 4 members are encouraged to contact me at LilPeck@gmail.com with their news for my Dirstrict reports for NARBC’s newsletters, and any concerns they have about the club. Newsletter deadlines are March 1, August 1, and December 1.

An issue before the NARBC Board this summer was whether to accept one of two reality TV show proposals offered to the club. Although individual members would be free to pursue such an opportunity if they desired, the Board voted unanimously to decline.

Are your prime seniors for NARBC national, April 16, 2016, Amana IA, in the nest box? If they weren’t born by August 16, they might not have the balance of coat maturity to freshness to be competitive for the senior classes. Many exhibitors consider the ideal competitive age for NARBC and ARBA Convention to be 8-9 months.

If I counted correctly, for prime juniors for NARBC national, does need to be bred on/after Sept. 17 up to Oct. 31, for rabbits to be under six months of age on April 16, but with maximum coat development. Of course, one runs the risk that the rabbits will go over the max allowed junior weight. You have to pre-enter for NARBC, so you can’t just bump your rabbit up to the senior class if it goes over junior weight.

I asked Betty Chu once about what she regards as ideal competitive age for English Angoras. She said (not in these exact words) that although the balance of length and freshness of coat is usually ideal in the 8-9 month range, there is no debate about the appeal to judges of the super long, extreme coats of the older rabbits. She often will show a rabbit that is 14-16 months of age. However, the consistently mild weather where she lives is optimum for carrying the coats a long time.

My own rabbits and I have been in sort of a holding pattern over the summer. Getting my wisdom teeth out set me back for a few weeks, but I finally recovered. It has been unusually rainy here, and so the humidity has been even worse than usual. My friend Laurie Holden is a relative newcomer to the rabbit hobby, and it was my pleasure to help her tattoo the bunnies from her first litter, a few weeks ago.

In late May, I resolved to begin a major lifestyle makeover, and I switched to the Paleo diet. There followed a very satisfying weight loss, and to date I have lost about 30 pounds. Last month, I also took up running, which was something I enjoyed very much when I was a lot younger, 2 decades ago. Much of the muscle memory from my earlier running seems to have remained, and I am improving. I actually decided to miss one upcoming rabbit show in order to go to a race with my husband Eric, and my rabbitry partner and daughter, Georgia Schafer, instead! 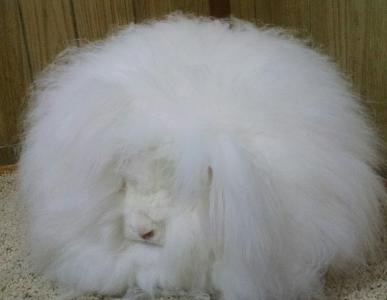 Here is a photo of an 8 month old doe, Moirai Brigette, who I plan to show this fall. She developed very slowly, and still has a way to go, but I am happy with her. She is a full sister to Wicket and Raquel.

I know that many of us here in Kansas and Missouri are really eager to get back to the shows after the summer hiatus. We miss hanging out together and enjoying each other’s friendship.